The club was founded in 1931 and today it is the leading club at this small danish chalkstream in Norther Jutland.

In the 1950s and 1960s the Binderup was renowned for its large population of big brown trout; fish, who would freely rise to a dry fly or take a nymph. During these years  Ove Nielsen and Preben Torp Jacobsen developed the modern danish fly fishing inspired by the english and american classics and modern fly fishers like Fank Sawyer and Oliver Kite.

Ove Nielsen would later become president of the club and Preben Torp Jacobsen grew into an internationally respected fly tyer and flyfishing writer. In 1965 they co-wrote the modern classic "Tørfluefiskeri" and the same year Oliver Kite visited them and fished the Binderup. The following years a steady stream of well known fly fishers would visit them and the river.

After 30 years of pollution and bad river management the Binderup has since 2000 steadily improved. We have a fine fishing for sea trout and the river is able to produce the number of fry and smelt needed for a healthy population of trout.

The stated goal of the club is to restore the famed population of brown trout and again make it possible to fish the dry fly and the nymph on a healthy river which also happens to be one of the unspoiled pearls among danish rivers. We are working with local authorities, national authorities, fishery biologists and other experts and of course landowners to make this happen. Furthermore, we are  seeking inspiration from practices on the English chalk streams and seeking guidance from English river keepers, experts and fly fishers. We are proud to be included in a vibrant network of chalk stream enthusiasts from England, Normandy and Denmark.

The club's water (16 kms of beautiful river) is not open for day tickets, but if you plan to be in Northern Jutland and want to try the Binderup you may contact our president, Uffe Westerberg. He may be able to set you up with a member - or maybe be your host for a day's fishing.

You may also send him a mail: uffe.westerberg(at)icloud.com 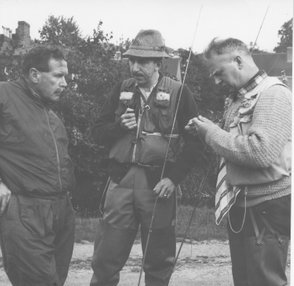